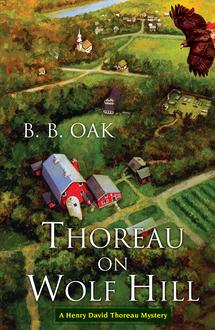 THOREAU ON WOLF HILL takes place in the winter of 1847.  James Polk is President, the U.S. is at war with Mexico, and over three million people in America are in bondage as slaves.  There are fervent reform movements to end slavery, give women voting and legal rights, and provide better conditions for workers, prisoners and the mentally ill.  The economy of New England is shifting.  Although it is still predominately agricultural, manufacturing and trade are growing by leaps and bounds, thanks to the creation of railroads, canals, and steamship lines.  Due to the potato famine in Ireland, a million and a half Irish will immigrate to America over the next several years and supply the labor for the expanding mills and factories.  At the same time many farmers are leaving New England to "go westering" in Ohio and beyond, where land is cheap and the topsoil rich.

Thoreau was born on July 12, 1817 in Concord, Massachusetts and christened David Henry.  (He later reversed the two names.)  He had an older sister Helen, an older brother John, and a younger sister Sophia.  His father John was a pencil manufacturer and his mother Cynthia was an active abolitionist.

Thoreau attended the Concord Academy and at age sixteen he entered Harvard, graduating in 1837.  He became a public school teacher in Concord but not for long.  When he was directed to use corporal punishment on his students, he resigned.  In 1838 he and his brother John opened their own progressive school.  Louisa May Alcott was one of their students.  The school closed in 1841 because of John's poor health.

In the years that followed, Thoreau worked on mastering the craft of writing and supported himself by surveying land, making pencils, tutoring, and taking on odd jobs.  On July 4th, 1845 he moved to a cabin he built on Walden Pond because, in his words, “I went to the woods because I wished to live deliberately.”

While living at Walden Pond Thoreau went to town to have a shoe repaired and was jailed for one night by the constable for refusing to pay his poll tax.  Thoreau's refusal was to protest slavery and the Mexican War, as he eloquently explained in an 1848 lecture at the Concord Lyceum called "The Rights and Duties of the Individual in relation to Government," later published as Resistance to Civil Government.  It was only after Thoreau's death that the work was published under the title Civil Disobedience.

Between 1847 to 1854 Thoreau wrote and revised his masterpiece Walden.  He studied nature and traveled to Cape Cod, Maine and Canada.

Thoreau took an active part in the abolitionist movement and the Underground Railroad.  In 1859 he spoke out in praise of John Brown for his violent resistance to slavery and advocated armed revolt to end such an immoral system.  "I do not wish to kill or be killed, but I can foresee circumstances in which both these things would be by me unavoidable."

Thoreau became ill in 1860 after camping out on Mt. Monadnock and contracting a severe cold.  He developed consumption and becomes steadily weaker over the next two years.  When a visitor to his bedside asked if he had made amends with God, Thoreau answered, with typical dry humor, "I did not know that we had ever quarreled."  He also stated, as more and more soldiers died in the Civil War, that he could never recover while the war lasted because he was "sick for his country."
On May 6, 1862 Thoreau died in the parlor of his family home in Concord.  He was forty-four years old and far from being famous.  According to his obituary "the name of Henry Thoreau is known to very few persons beyond those who personally knew him."  His long-time friend Ralph Waldo Emerson stated in his eulogy "the country knows not yet, or in the least part, how great a son it has lost."

Thoreau is now acknowledged as one of America's greatest writers and millions of copies of Walden have been sold since his death.  The book, a celebration of life, relates how he experienced the divine through nature.  Thoreau had great optimism and faith that if we advance in the direction of our dreams, and try to live the life we imagine, we will succeed.  He most certainly did.

In 1846 doctors knew little more about the true nature of disease than the Greeks in the 5th century BC.  Hippocrates codified a system that stated the body was controlled by four basic substances, called humors, and an imbalance between these humors was the cause of all disease.  These humors were called black bile, yellow bile, phlegm and blood and corresponded to the four earth elements of earth, fire, water, and air.

This system dominated medical thinking for more than 2,000 years, until the mid-19th century, and had no basis whatsoever in reality.  Patients were bled, had leeches applied to their bodies and were given murderous doses of mercury, opium, and other poisons in the attempt to rebalance the body humors, all to no effect.  In fact, the cure often killed the patient before the disease had a chance to do the same!  George Washington had a severe cold and to cure it his doctors bled him so severely he died from loss of blood, called exsanguination.

A public sewer system was not installed under Boston's streets until 1875 while in the country flush toilets were not common until the 1920s.  Until then human waste regularly polluted public water systems and the private wells in small towns like Plumford and on the farm.  Chamber pots and outhouses, the pits of which had to be constantly filled over and relocated, were what most people used throughout the 19th century.

There were a few medical colleges in the United States but any individual could declare himself a doctor and practice medicine without a degree.  There were no legal requirements to become a physician.  The vast majority of doctors were trained by simply following a more practiced physician on his rounds.

Doctor Adam Walker, a main character in THOREAU ON WOLF HILL, received his training at Harvard Medical School.  He could competently set bones, amputate limbs, sew up cuts, assist in childbirths and alleviate pain with opiates, but much beyond that depended on luck and a doctor's common sense.  Medical science was in a primitive state.  Instruments as simple as the medical thermometer did not come into practical use unit the 1870s.  Before that, it was up to the doctor, his hand and his experience, to determine if and how severe a fever might be.  The ivory or brass stethoscope was just coming into general use in the 1840s.  The hypodermic syringe was not invented until 1853.  Attempts at giving blood transfusions using the syringe often ended in death because blood types were not discovered until the early years of the 20th century.

The practice of surgery was in a similar primitive state.  Anesthesia did not come into use until 1847 and was rarely available to surgeons as late as the Civil War years of 1861-1864.  The awful pain of an operation necessitated the surgeon work as fast as possible.  No matter how skillful the surgeon, infection often killed the patient since wounds were rarely cleaned before and after an operation and doctors seldom bothered to wash their hands and surgical instruments.  Doctor Walker does clean his surgical kit and wash his hands before performing an operation but more from a sense of personal cleanliness and a respect for his patient than any specific knowledge concerning infection.

Why, then, were doctors consulted at all when there was scant evidence they helped a patient?
In fact, oftentimes calling in a doctor was avoided until the situation was so dire even modern medicines and techniques could not save the patient!  But doctors did save lives with their limited knowledge and personal skill.  Patients and their families believed a doctor's medicines and skills were better than nothing – especially his surgical skills.  A leg infected with gangrene was certain death and although an amputation was risky, it was worth the gamble.  And oftentimes a confident hand, a calming presence, a sympathetic ear, and an understanding heart, worked to alleviate fear and bring real comfort to the afflicted and their loved ones.

Tuberculosis was called consumption because sufferers of the disease became emaciated and appeared to be wasting away, as if consumed from within.

Consumption was the leading cause of death in 19th century New England, attributed to one-quarter of all deaths.  A virulent form of the disease, called Galloping Consumption, spread and killed quickly during epidemics.  Or a sufferer could live with the disease for years.  In some families, one generation after another contracted consumption, leading doctors to believe it was hereditary rather than contagious.  Other medical theories claimed that consumption was caused by overindulgence of food, drink, tobacco, dancing or sex.

In fact, tuberculosis is a communicable disease but it was not until 1882, when Robert Koch discovered the tubercle bacillus, that doctors understood how it was transmitted.  The bacilli were spread through the air and it was no wonder that members of the same family contracted tuberculosis.

This was not known during the time when THOREAU ON WOLF HILL takes place, however.  Consumption was treated most ineffectively, with drugs such as calomel and laudanum, and the standby cure-alls of purgatives, emetics, blistering and bleeding.  More outlandish treatments included rubbing the chest with sulfuric acid, collapsing the patient's lung, and pumping sulphureted hydrogen and coal gas into the patient's rectum to "enliven the circularity system of the lungs."

The symptoms of consumption included night-sweats, hectic fever, chills, weight loss, pallor, debilitating weakness, coughing up blood, hoarseness, and complete loss of voice.  Such symptoms were associated with vampirism, and when members of the same family began to weaken and die in succession it led to the belief that the deceased were feeding on the living at night.

The belief was especially prevalent in New England, where consumption was widespread.  There are accounts of vampire exhumations that go back to the 18th century and well into the 19th century.  The body of a family member suspected of preying on others would be dug up to see if there was any evidence of fresh blood.  The scientific explanation for why a corpse would have blood that appeared to be fresh on its mouth and in its heart where not known and such evidence was taken to be proof of vampirism.  The heart and lungs of the corpse were burned and sometimes the head was decapitated and placed at the feet of the body.

Thoreau himself recorded such an incident in his journal on September 29, 1859:
“I have just read of a family in Vermont who, several of the members having died of consumption, just burned the lungs, heart and liver of the last deceased, in order to prevent any more from having it.”

In the 18th and 19th centuries in New England the townspeople who could not support themselves were put up for bid at a public vendue auction.  Vendue comes from the French vendre, "to sell."
The indigent were placed in the private homes of citizens who offered to accept the least amount of money from the town to take them in.  Poor families were broken up.  Orphaned children became apprentices to those who needed their labor.  The paupers worked for free in return for food, clothing and shelter.  Their welfare depended on the good will of those who had made the lowest bid to care for them.

New England communities felt responsible for the caring of their poor and this system seemed the most economical way of doing this.  Vagrants were warned that they would not be supported by the town.

INDIVIDUALS WHO EXPRESSED THE SPIRIT OF AMERICA BEFORE THE CIVIL WAR