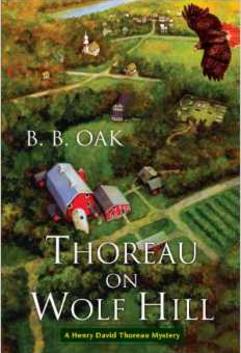 2.  How does fear cause characters to act in irrational ways in Thoreau on Wolf Hill?

3.  Is Solomon Wiley sincere in his beliefs or is he an opportunist?

4.  What is the difference between how vampires were regarded in 19th century New England and how they're regarded today?

5.  What are examples of Henry's observational and deductive skills throughout the book?

6.  Because of his deformity, Noah becomes a scapegoat.  Is society more enlightened now in dealing with those who act or look different?

7.  Why does Adam prefer performing surgeries (even without anesthesia!) to treating disease?

8.  As Julia's relationship with Mrs. Swann develops, what do we perceive about each of them?

9.  In Henry's questioning of Noah after the barn fire (pages 152-155) and his questioning of Orton in the opium den (pages 165-168), what do we learn about his character, personality and methods of getting at the truth?

10. Why do Henry and Adam decide not to tell Justice Phyfe the truth about his daughter?

11.  Why is Dr. Lamb looking so fervently for one of his kind?

12.  What does Henry mean when he tells Noah that heaven is under our feet as well as over our heads? (page 270)